KALACHAKRA 2012, with Dalai Lama in India 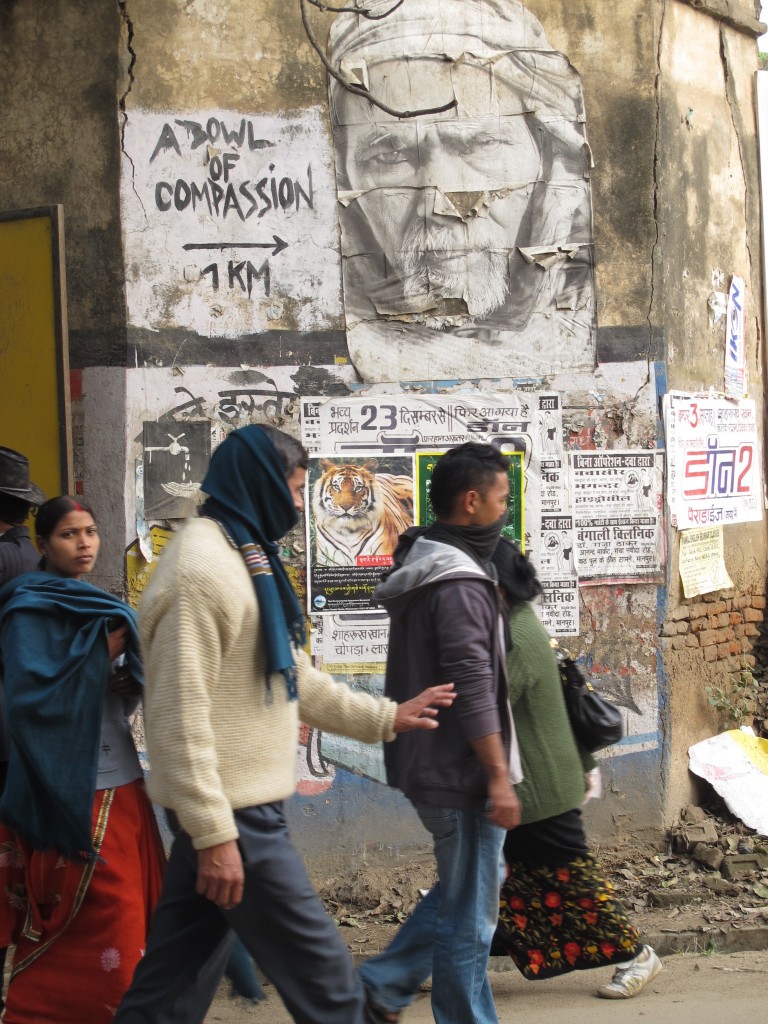 Posted in: Inspiration, Photos, Spiritual, Travel | No Comments | Posted on February 5, 2012 by kari

Here we are, waiting for the train in a chilly grey morning at Varanasi train-station, it is just one and a half hour delayed; no big surprise…

Our first train-travel at this trip in India.

The station in Varanasi, area looks like any train-station just like we remember them from years back, nothing seems to have changed. Dirt and rubbish everywhere, crowded with people sleeping all around in the hall or outside,totally covered under thick blankets; beggarsevery few minutes approaching with an hopeful outstretched hand; and sellers yelling sharply, offering different snacks often from a basket balancing on their heads, or selling sweet delicious chai (milk-tea) which we all four very much love. From distorted speakers we are hearing continuous undecipherable messages informing about incoming trains…. Fat rats and limping sick dogs searching for food, even a cow have found its way into the waiting hall wandering around, nibbling at people’s bags, to Kai’s hilarious entertainment. Outside people are waiting patiently along the trackswith heaps of bags and packages, looking like they had been sitting there for days…

The train finally arrives, and we find ourselves running along an seemingly endless row of carriages in search of the right number, and locate it almost at the very end, jump up and search for our seats, which turns out to be occupied by some people but they move without argument. So now we find ourselves in a surprisingly spacious and relatively clean wagon, with quiet and friendly people. This has for sure to be called even a comfortable ride in Indian terms, definitely not like it used to be.  The only sort of interruptions are the famous vendors, passing by every few minutes with their funny shouting voices offering everything from chai, sandwiches, samosas, peanuts and all variations of spicy snacks which makes such a trip a non-stop culinary experiment as long as you take care to keep a couple of water-bottles close by…..

But that makes the trip just more colorful and fun (or exhausting for some).

Our destination is Bodhgaya, one of the most holy places for the Buddhists. It was here PrinceSiddhartaGautame 2600 years ago spent 6 years in almost continuousmeditation, reached enlightenment and developed his philosophy of life.

Now for 10 days it willbecome the very center for Buddhists gathering from all over the world due to the 32ndKalachakra, which is a Buddhist initiation-ceremony for new Buddhists, involving teachings and lecturesheldby the Dalai Lama over several days.

Put 400 000 people together in a small village where normally 30 000 people live, and you get chaos, with or without Buddhist Zen…

First of all of course no accommodation available.

Upon arrival, locals are offering the visitors basic rooms in their houses no matter the condition, for 10 times normal hotel price; many people try to ask for one night the equivalent of a basic monthly wage in India (approx. 50 euro)

While we are trying to arrange what is needed to get a pass for the premises of the opening the next morning, still not knowing where we will sleep, a young guy is approaching us. His name is Vijay, and he tells us he is renting out a room in his family-house for “as much as we could donate” as he say himself, genuinely not being greedy.We really have been lucky. He turns out to be a beautiful and pure person, being responsible of taking care of his whole family as well as being a student, and still finding time for a lot of volunteer work at a local school.

His good heart springs out from his strong belief in karma, believing that positive thinking and good deeds will improve your status and condition also for this life and even morein your next life. He and his family lives in a traditional house at the outskirt of a small village 15 minutes walk from Bodhgaya, keeping 3 cows and a small piece of land to grow vegetables.

Kai and Maya and cows

Wow! What a bliss for body and soul to relax for a while on their roof-top surrounded by heaves of hayand grainwhich is laid on the roof to dry.

Smelling of farm and nature; and with a fantastic view of green fields and rural landscape; seeing in the distance the holy mountain where Buddha is said to have been sitting in a cave meditating for 6 years in his search of his way to enlightenment.
Clean air, peace and quiet.

Such an appreciation of silence after the intense sound pollution of the streets in Varanasi where everyone are literally hanging on the horn non stop, sharply penetrating your inner ear to the level of pain. Bodhgaya itself ispacked with people, a never ending wave of colorful reddish cloth in all nuances of burgundy, orange, and yellow, the traditional colors of Buddhist monks, nuance-variations depending on which monastery or direction within Buddhism you belong. The morning when Dalai Lama is scheduled to give his opening speech in English, to welcome all the 40 000 people expected to enter inside of the gates of the event, we are getting there relatively early, but find a lot of people ahead of us…, lines which of course ends up being many hundred meters long.

We are in the meantime informed that camera, mobile phone and sharp objects must be left outside, so no photos please. We take the risk and leave everything at a hotel reception nearby, a bit unsafe, but trusting that it will be ok…

Well inside the gates we manage to get quite far ahead, tumbling with the people, being squeezed in a lot of pushing jumble of arms and legs, butmanage to finally find a spot between the monks, quite close to the front stage, about 50m from Dalai Lama.

He is welcoming each country which has participants at the gathering, one by one by one;endless amount of nations, no matter how few visitors. I must be the only Norwegian waving when he welcomes Norway as country hundred-something down the list.
After this very long opening, he gives a general introduction to Buddhist spirituality, with a lot of laughter and jokes. He seems for sure to be a happy guy.

It is an interesting and powerful experience to observe this enormous red sea of
40 000 excited religious devotees in front of their spiritual leader; listening, chanting and praying.

Our legs are starting to hurt after several hours on our knees, and we decideto leave, but trying to get out is a mission worse thanentering, we get even more squeezed and pushed, falling over others sitting. A lot of people are still pressing onto get ahead to see His Holiness, and at the same time Buddhist monks who have been handing out Tibetan to the crowd inside, are pushing and running aggressively through the crowd with empty breadbaskets above their heads, wanting to get out for refill.  Good intentions, but what about Buddhist calm spirit of peace and respect?? It feels like the worst stampede we’ve been in for a very long time, if ever, especially with Kai in the middle.
Quite a relief to get out (and to pick our equipment which lucky enough is still there). Before arriving to Bodhgaya, we had imagined an event with a lot of quiet spiritual energies, joint meditations, peace and harmony; so the bustling fusion of festival, market and fiesta amidst the crowded religious event is quite overwhelming.

A lot of the excitement derives of course from the fact that this is the biggest Buddhist gathering taking place every 2-3 years, an important event especially for the many Tibetans who are spread all over Asia in different countries, with Dalai Lama being in exile in Dharamsala in North India. This is just as much an event in the spirit of joint fight for Tibet and its independence, to inform about abuse on human rights and people’s condition; as well an opportunity to meet friends and family with a common language, culture and religion; eat Tibetan food, or buying Tibetan goods or shop some new clothes for your monk-outfit with a matching bag (Kai is now a proudowner of 2 monk-shirts).

This is also a special event for beggars. They are everywhere. Rows and lines of hundreds of beggars wherever we turn our heads. Normally not hanging around you, only children sometimes, but mainly sitting there along the road, one after the other, or moving around between the people. Beggars with leper, old and sick people, others deformed in indescribable ways; some with missing limbs, mothers with children.
It is painful and heart wrenching.
This event is almost like a paradise for needy people, coming from far away, wanting to seek the luck with over 300 000 Buddhists filled with compassion and with a wish to give, especially in this holy city. The chance to get some decent money in your bowl is for sure larger here right now than most other places.

There is even a special coin-service if you needsmall change to give, people are selling bags of 90 rupee-coins for 100 rupee, to make things much easier. Lin and Kai are having their pockets filled with coins and can at least feel a tiny bit of relief by putting money into many bowls one after the other along the way, as a lot of people do. After our experience inside the compound of the first day, we decide the other days to instead listen to Dalai Lama’s lectures by simultaneous translation broadcasted on FM radio frequencies from the outside.  We find a beautiful quiet spot in a meditation park beside the amazingly beautiful Mahabodhitemple. This temple marks the place where Buddha finally reached enlightenment under a Bodhi tree.

Much of the lectures are readings from scriptures and books, quite complicated to grasp; while other parts are reflections and personal opinions of Dalai Lama himself about human relations and the path to awareness.
A lot of food for thoughts from a wise man. After five days of following the stream and being pushed around; and five nights fighting with 5000 mosquitos, we decide to head back to Varanasi.  We are happy to have been in Bodhgaya, it has been a special experience, but now we are quite ready to leave. Ready to go back to Varanasi to search for the best Tablamaster …..