View all posts by Offer → 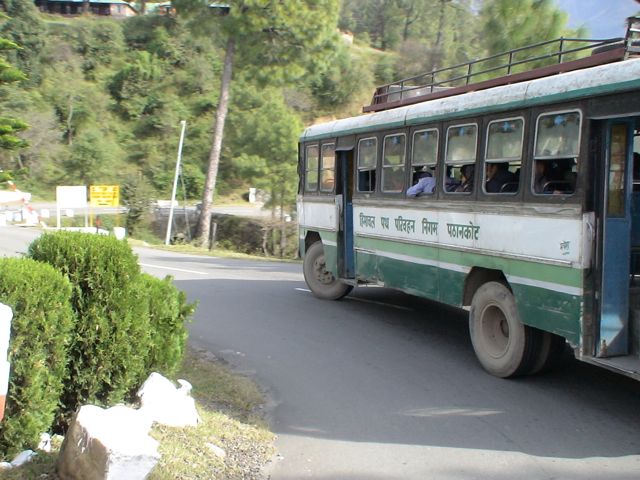 On our way to Varanasi, Sadly hour last hours in Nepal, our visa is expire today after wonderful moments in this stunning country and our next destination will be India, exploring it for the next few months. I am extremely curious what have happened & changed in 13 years since my last 6 months un forgettable journey in this mini universe called India.
Waking up at five AM to take the morning van from our lodge in Lumbini, the birth village of Buddha, to the dusty, grey and noisy border point in Sunauli.
We instantly recognize that the Japanese guy joining us, who barely speaks English has been ripped off and was sold the ride including the bus to Varanasi for 1750 Rupees (17.5 Euro), instead of about 500R (5 Euro).
We had been warned about doughy travel agents and felt experienced and sure not to fall into this classic scam trick.; so when our driver stops the car before the border and tries to convince us into the office of the fat, slick Indian agent who gives the expensive bus-ticket to the Japanese and keeps trying to sell me as well, I am firm with my answer and tell him that the ticket to Varanasi costs 210 Indian Rupees (3 Euros). He seems to understand the message, and make a call to the Indian side for someone to meet Ted, the Japanese fellow. We take Ted under our wings to make sure he is not ripped of again, and we enter India.
The difference in atmosphere, amount of people, noise, dust and amount of garbage on the street is extremely sharp within few meters distance of changing flags. Mr. Bidal, who is the appointed guide for Ted, is waiting for us on the stamping point on the Indian side and lead us again to the “Tourist Express bus” that soon will be revealed as a completely broken, wrecked bus; again different people approach us and one by one try to convince us that this fallen-apart bus is the express tourist bus, but I reject them firmly. In this point they ask for the ticket which just a few minutes ago was given to Ted on the other side of the border, and the real ticket of 209 Rupees appears, he understands that he was cheated.
While we are witnessing all this, 3 Indian aggressive men then approach and tell us that we must purchase tickets in the office. I ask the man who stands next to the door and looks like the tickets man, whether he sells tickets and how much it cost, but I get no reply, he do not seem to understand any English at this point.
I don’t have much choices and I follow the guys to the office, where they for the fourth time are trying to sell me expensive tickets for a rusty worn-out wreck. They ask 2400 Rupees (about 35 Euros) for our 4 tickets, I know that the tickets are supposed to be 836 Rupees (around 12 Euros), and I keep telling them that I refuse to pay more than the official price and that I know they are liars, but they are insisting that this is the government price and an express bus which will arrive in 7 hours, and if we don’t pay now we can leave the bus. It seems that I am stuck and need to make a decision whether to have the kids out with all our bags at 7 o’clock in the morning and figure out what is going on and find alternatives which seem to be very few, or just pay and get going. I decide to pay although I am sure I am fully been scammed now, but nobody around seems to being helpful to tell us the truth.
A minute after my payments is done, a new big Indian guy, with bad aggressive energy, appears to give me the real tickets bought in front of me from the bus-ticket-man who all of a sudden perfectly understand English, the total is 627 Rupees, Apparently Kai is not required to pay on this Buses because he is under 10 years old, same like in Nepal (in Nepal kids under 10 years old are free from every official tickets and fees). The big guy ask me to give him the ticket they gave me a minute ago, but I refuse and it almost gets into a physical fight in this point. I tell them to get lost and raise my voice as loud as I can so everyone around will be aware, with words I know Indians are sensitive to, about their Karma when facing themselves as thieves and liars. The local people on the bus seem impressed and agree to my words, nodding with there heads and for the first time seems like having some involvement in all what was happening in front of their eyes.
17 hours later, we enter Varanasi, very cold, our backs hurting from the stiff wooden benches and with a slightly beaten ego; still having a hard time to face the fact that we have been scammed in such a way; but nevertheless, we are still smiling. We hope this was a cheap lesson to how things sometimes work here in India. (It does not matter how experienced you are, how much you saw in life and how many attempts of scamming you managed to successfully avoid without any damage, it might happen to you as well when you expect it the least)